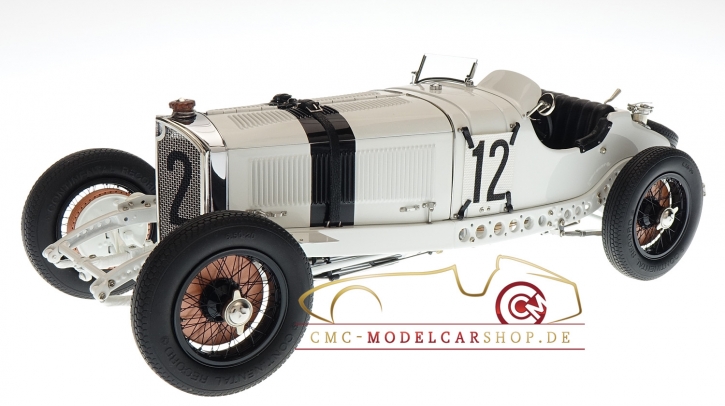 Description of the original vehicle: After the cancellation of its 1955 season due to a tragic accident in the 24 Hours of Le Mans, the Grand Prix France resumed on July 1, 1956 at the "Circuit de Reims-Gueux" in Reims. It was the fifth race of the 1956 World Cup. Ferrari had a lot to prepare, for its Scuderia had won only one race on this track back in 1953. Scuderia Ferrari announced three regular drivers -- Juan Manuel Fangio, Eugenio Castellotti, and Peter Collins. The fourth position went to Alfonso de Portago, a Spaniard who would compete for his first Formula 1 race. A fifth car was for Olivier Gendebien. All took to the race track in a 265-hp short-nose D50.
For Ferrari, the biggest rivery in the competition for World Auto Championship came from Maserati, which had Stirling Moss, Jean Behra and Piero Taruffi on the team to pilot its fine 250F fleet. Among other opponents were the British team Vandervell Products Ltd, equipped with the Vanwall VW56 and the French team Gordini, equipped with Gordini's Type 32 and Type 16. There were also several privateers eager to compete in their Maserati 250F‘s.
As far as the drivers' standings were concerned, Peter Collins and the Stirling Moss topped the list, preceeding Jean Behra and J.M. Fangio. During the practice driving, however, it became apparent that Ferrari was in a class of its own, and three of its cars qualified to take off from the first row in the forthcoming race. Fangio won pole position by a second or so ahead of the second-placed Castellotti. Collins qualified for the third place by another second behind.
During the qualifying practice, the Maserati 250F was found to lag behind in improving its race times. In contrast, the Vanwalls were able to keep up with the Ferraris. As for the Gordinis, they were very much like a a local team that could only put up a performance in the rear midfield.
The race consisted of over 61 laps, covering a total distance of 506,422 km. Scuderia Ferrari showed signs of dominance early on during the race. Collins took the lead ahead of Castellotti and Fangio, and the Ferrari trio was able to break away from the followers by several seconds. Behind them, Moss of the Maserati team and Harry Schell of the Vanwall team dueled for the fourth place. On lap 5, Schell suffered an engine failure. On lap 12, Stirling Moss had to beat a retreat with a defective gearbox. Both drivers, however, were able to continue the race a short time later in vehicles taken over from teammates.
For Harry Schell, things went very well. Not only was he able to work his way up to the fourth place, but he was also poised to overtake Castellotti and Collins after lap 31. He succeeded and was in the second place for six laps.
When the Ferrari pilots realized that Schell was not one lap behind as they had thought, they accelerated hard. Collins and Castellotti surpassed Schell, whose car soon developed technical problems and entailed a pit-stop that would last some five minutes. At the same time Fangio had to go to the pit, too, and it threw him back in the fourth position.
Eventually Peter Collins won his second Grand Prix race by a narrow lead of 0.3 second ahead of his second-place teammate Eugenio Castellotti. Jean Behra took the third place in a 250F. Despite a new lap record set during his last race lap, Fangio had to settle for the fourth place.
Regarding the competition for the 1956 World Chamionship of Drivers, Collins secured a five-point advantage over the second-place candidate Jean Behra. Fangio was one point behind Behra and ranked third. Sterling Moss was a loser, who dropped to the fourth place for the time being.